So, you’re all set to go on an adventure, and you need a drone to take some nice shots. With how quickly technology moves, this might seem like a daunting task. But there’s no need to worry! With our help, you’ll learn to pick the best drone for adventure shots that suits your needs.

Advantages of picking the best drone for adventure shots

If you’re unfamiliar with them, drones might come off as a luxury, or as an overly complicated gadget. After all, bringing a camera along will net you the pictures you need for that trip you have planned. However, any well-seasoned adventurer knows that it’s hard to capture the real feeling and sensation of an adventure. How do you encapsulate the breathtaking vistas of a large scenery, such as a forest, a mountain or a beach? A simple camera might suffice for nice memories, but the aerial shot of a drone will make for great tales.

Depending on your needs, there’s several factors you need to consider when buying the best drone for adventure shots. While not all of these might be relevant to how you intend to use your drone, they’re all worth considering. Most drones will include information regarding these factors in their specifications, so it’s easy to spot what you’re looking for.

The amount of time drones can remain in the air depends greatly on their battery since they’re operated remotely. If you like going on long adventures and taking many different photos, a long-life battery drone might be necessary. On the contrary, if you need it for short but meaningful moments, a shorter-lived battery might be more efficient. How the battery is recharged is also of great importance since you will most likely be traveling with your drone. If you don’t expect electricity outlets to be available, drones with replacement batteries will work best.

Not all drones come equipped with cameras, as some expect you to attach a GoPro to them. If you’re looking for the best drone for adventure shots to deliver high quality pictures of your travels, you might to consider a drone with a built-in camera. Taking that into consideration, you should be mindful of a few things when checking the specs of such camera:

The maximum height your drone can fly at might be very important depending on the topography of your travel destinations. A forested area, a touristic resort or a residential zone with high rise buildings might require higher flight heights. Likewise, if you intend to take shots closer to ground level or in flat areas like a beach, lower flight heights will do.

How a drone is handled and how orders are relayed to it is very basic, but extremely important. When picking the best drone for adventure shots, you might feel more comfortable with a remote control in your hands. However, if you prefer using your phone to relay orders to it, that is also possible.

Just like with flight height, the topography of your travel destinations plays a big role when considering the control range of the drone. If you’re taking shots of landscapes from high up or use the drone for exploration, longer ranges will work wonders.

Top 4 picks for the best drone for adventure shots

Now that we’ve gone over the basics and essentials of drone features, we’re ready to go over our picks. Finding the best drone for adventure shots that suits your needs will be cinch after checking this list.

Our top pick for the best drone for adventure shots is a DJI model, the Mavic 2 Pro. And this comes as no surprise, as the model is a veritable powerhouse with its robust specs and features. Despite being a high-end model, it is small in size, easy to storage and light to transport. In addition, compared to its competitors, the image and video quality of the model is nothing short of impressive. It stays safe during flight by using obstacle avoidance sensors. On top of all of this, the DJI Mavic 2 Pro has great battery life.

For model of its size, the DJI Mavic 2 Pro leads the list of best drone for adventure shots with crisp, clear video and image quality. The drone stands above its competition with the large, 1-inch imager it’s equipped with. With it you can take 4K DCI format videos at 24, 25 and 30 frames per second. If you choose to film in 2.7K, settings for 48, 50 and 60 frames per second are also available. Recording in 1080p unlocks one more setting of 120 frames per second. Furthermore, you can switch angles of view at higher quality settings, for different results when recording video.

This model can fly up to 31 minutes, but this time might be reduced depending on how it’s used. Thankfully, monitoring battery levels is easy thanks to the remote control that comes included with this model. The control has a cable that connects to your phone along with clips to hold it, and is gray colored. The remote-control display shows the battery status and other important details. It’s recommended that you use a phone despite it being optional, to see camera feed with its screen.

The remote control includes 2 flight sticks to maneuver, control wheels, buttons and shoulder buttons to control the drone functions. Functions include taking pictures, recording video, return-to-home feature, and a pause feature to keep a drone in place. In addition, the drone comes equipped with 8GBs of internal storage, but that can be increased with a microSD card. As is standard for a drone of this caliber, it includes obstacle avoidance sensors. While active, they stop the drone if an obstacle is detected. Switching to the Sport setting will disable the sensors however, in order to speed up the drone.

The Autel Robotics Evo is the second pick for best drone for adventure shots, earning its place with high frame rate 4K video capture. While most drones tend to come in various shades of gray, the EVO model has bright orange and black coloration. This makes it easily stand out and makes it attractive to the eye, plus it’s easier to locate outdoors. It can be flown without a smart phone and has long battery life, making it a very independent model. Its battery is charged with a charger that includes a port to also charge the drone remote control included.

As previously mentioned, you can fly this drone without the need of a smartphone. The digital display included in the control remote can show you the video output of the drone. This display also shows you the battery life and other important details of your drone. The controls are intuitive and responsive, easing both landing and taking off. Despite not being mandatory, a mobile phone helps you unlock the full suite of features available to the drone. Therefore, it’s recommended to install the Autel Explorer app to make use of various nifty features that will improve your user experience. 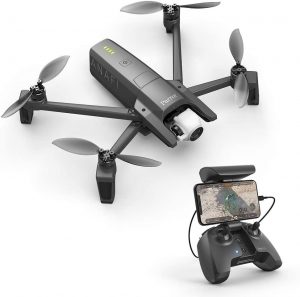 Size and portability are always a priority when it comes to portable electronic devices. The designers of the Parrot Anafi understand this, with the release of a very compact but powerful drone model. With the many features it includes despite its size, this model could easily be the best drone for adventure shots. Its features include the capacity to record video at 4K, has gimbal stabilization, a Hyperlapse function and HDR video capture.

Footage recorded with the Parrot Anafi is quite seamless and smooth, thanks to its gimbal stabilization. This prevents changes in direction, speed or altitude from abruptly shaking the camera, therefore improving the recording output. Recording can be done at 4K at 24 or 30 frames per second. Lowering the resolution settings to 1080p allows you to capture footage at 60 frames per second instead. For photos, the drone takes pictures with a 21-megapixel resolution, which results in larger pictures than most other drones. It should be noted that this drone does not record sound.

The Hyperlapse feature allows you to record moving time lapses, with speeds ranging from 15 to 240x. Surprisingly, this model also allows you to record in slow motion, which is an unusual feature in drones. Another unusual feature is HDR video and photograph capture, which can add visual impact to your shots. It can be turned off based on your preferences, or if you would rather edit your shots manually. Finally, on our list of highlighted (and unusual) functions, the Anafi features digital zooming up to x3 power. It’s also worth noting that the companion app, FreeFlight, allows you to further customize some of the drone’s features. 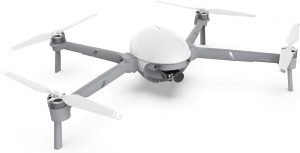 Despite its peculiar and unusual shape, a combination of useful features and solid construction make the PowerEgg a solid contender for the title of best drone for adventure shots. As the name suggests, the drone is shaped like an egg when folded, which protects all of its moving parts. The shape makes it easy to stow away and carry around, as it is not as fragile as other drone models. Not only that, but the propellers don’t need to be reattached anytime you wish to use it, as they’re irremovable. This might seem like an odd design choice, but the egg shape keeps the propeller safe from harm when folded.

This drone model includes a GPS system, which helps stabilize it in flight and enables various other flight modes. Even if the GPS isn’t available in certain locations, the drone is equipped with sensors that keep it stable. This model also includes two different remote controls. The first one can be attached to a smartphone by using clamps, and uses a standard joystick control scheme. The second remote control is named the Maestro, which features a gesture-recognition system.

One of the most important features of the PowerEgg is its autonomous flight modes. You can make the drone circle a predetermined target by using the Orbit Mode. The Follow-Me mode works best for following a target through a specific path, at a given speed and distance. Finally, you can make the drone through a predetermined path using the Cable Cam Mode. Not only that, but the 3-axis Gimbal stabilization ensures that footage captured with the drone is smooth and seamless.

If any of the four drones listed could be the best drone for adventure shots, what would the deal breaker be? The final deciding factor is how you intend to use them and for what occasions, as that will decide which suits you best. If you want a multi-feature powerhouse, the DJI Mavic 2 Pro has you covered both on utility and quality. If fluid video at high resolutions is your priority, the Autel Robotics EVO won’t let you down. Likewise, if portability and size are a concern, the Parrot Anafi has the competition beat with its compact design. Finally, you prefer a novel design and higher frame rates at lower resolution rates, the PowerVision PowerEgg won’t disappoint.